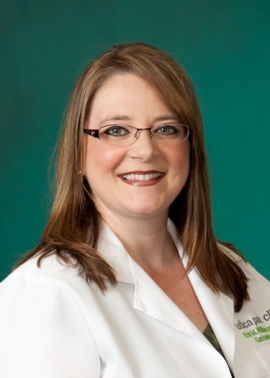 Erin Williamson, APRN-CNP, has been a Nurse Practitioner since 2009 and practices gastroenterology. Patient comments about her include:

"Five stars for Erin Williamson and Dr. Jeffrey Hunt! They were most courteous, kind and helpful."

"I was very anxious about a future procedure, but Erin explained it and put my mind at ease."

Erin received a bachelor’s degree in nursing from the Jewish Hospital College of Nursing & Allied Health in St. Louis, Missouri. She earned a Master of Science degree in Nursing from the Goldfarb School of Nursing and Barnes-Jewish College in St. Louis, Missouri. Erin is certified by the American Nursing Credentialing Center. She is a member of the American Nurses Association and the Crohn’s & Colitis Foundation of America.

She was really nice She listened and cared.

Erin did a wonderful job at making me feel HEARD. I’ve been living with symptoms for so long after other physicians didn’t take me seriously. I have a lot of anxiety visiting medical professionals still but people like Erin are helping to resolve that anxiety.

The staff were very courteous and took time to hear my concerns. I felt like I was heard and not rushed out in 5 minutes like any other typical doctors office.