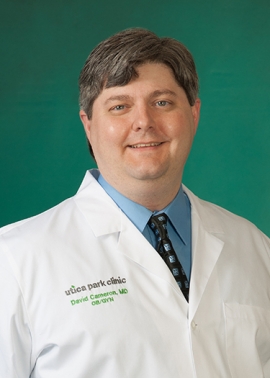 David Cameron, M.D., has practiced obstetrics and gynecology in Oklahoma since 2016. He knew he wanted to be a physician from an early age. “For me, being a doctor was truly a calling,” he said. “Ever since I was a little kid, I have never wanted to be anything else. I find the human body fascinating and I get a deep sense of satisfaction helping people feel better.”

When treating patients, Dr. Cameron believes open communication is the key to success. “Being a doctor is a combination of a confidant, teacher and advocate,” he said. “I want you to feel open and able to tell me the things that are bothering you. Then I can teach you about your body, what may be going on and the various management options, so together we can figure out what options are right for you.”

Dr. Cameron decided to focus on OB-GYN during his time at medical school. “It was the women I saw during my OB-GYN rotation who encouraged me to pursue this specialty,” he said. “They said I made them feel at ease, was gentle and was non-judgmental. I felt that women telling a man he should go into gynecology was a pretty strong endorsement.”

Prior to joining Utica Park Clinic, Dr. Cameron worked at OU Physicians in Tulsa. He received Bachelor and Master of Science degrees from University of Arkansas in 2004 and 2006, respectively. He earned a medical degree from St. George University in 2012. He completed an internship at Long Island College Hospital in 2013. He completed a residency at William Beaumont Hospital in Royal Oak, Michigan in 2016.

When he is away from the office, Dr. Cameron enjoys spending time with family and his dog, Beau; cooking Cajun and Creole food; reading; and traveling internationally.

On the campus of Hillcrest Medical Center at:

On the campus of Hillcrest Hospital Henryetta at:

Protect Yourself from the Flu
Community Resources

Dr. David Cameron did my ovarian cyst removal surgery and saved my ovaries and I am now pregnant! Only OBGYN I’ll go to now. He saved my life. (Update he delivered my daughter and did amazing with her and with me! He actually cares and is there for his patients. ) I wouldn’t want anyone else to be my Obgyn. The team is amazing too. I love his assistants.

Dr. Cameron is the BEST gyno I’ve found in 5 years! I’ve been bleeding for months and every doctor I see says they can’t find anything wrong and it’s probably nothing, it’s been really affecting my life it’s scary to just bleed like that and not know what’s going on, I found dr Cameron on google and made an appointment and within 2 weeks now my bleeding is gone and I’m doing SO much better!! I haven’t felt this good in 10 months or so he’s a really caring doctor and he doesn’t rush your appointments like all these other gynecologists he really takes his time to help you with whatever your needing! I’ll be recommending him to everyone!

Dr Camron did my tubal ligation surgery and was very attentive to my needs. He got me in quick for surgery just like I asked and everything went smoothly!!