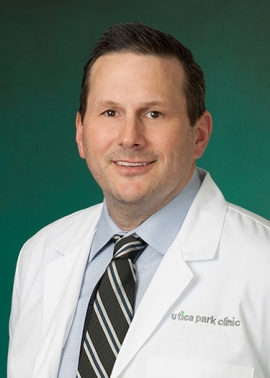 Orthopedic Care
Sports Medicine
Chad Crawley, D.O., has practiced orthopedics in Oklahoma since 2007. He was board certified in 2012 and completed fellowship training in 2015.
Prior to joining Utica Park Clinic, Dr. Crawley cared for patients in McAlester, OK and at Central States Orthopedics in Tulsa. He welcomes the opportunity to help you with any general orthopedic concerns and he is particularly skilled in the areas of:
- Total hip replacement (via a unique, direct anterior approach)
- Total and partial knee replacement
- Revisions of total hip and knee replacement
- Treatment of infected joint replacements of the hip and knee, and
- Robotic-assisted joint replacement
One of Dr. Crawley's area of expertise is total hip replacement. His direct anterior (front) approach to hip replacement has many benefits over the more traditional – lateral (side) or posterior (back) – approaches. This cutting-edge technique has attracted patients from across Oklahoma and the multi-state region who take advantage of the benefits, including:
- Less discomfort and pain
- Shorter recovery time
- Lower risk of limb length differences
- Lower dislocation risk
“Following their hip surgery,” Dr. Crawley says, “most patients are walking with assistance only a few hours after the procedure. Generally, patients can return home a day after their surgery or even the same day.” Dr. Crawley was fellowship trained in the direct anterior approach hip replacement technique. He has performed or assisted on over 1,000 procedures of this type.  He has also served as a preceptor in teaching other surgeons on the details and technical aspects of the direct anterior hip replacement. He uses it on almost all of his primary total hip replacements. When it comes to your health and well being, experience matters. For more information, read the blog.
Dr. Crawley earned his Bachelor of Science degree in physiology from Oklahoma State University in Stillwater in 1997. He received his medical degree from the Oklahoma State University (OSU) College of Osteopathic Medicine in Tulsa in 2002. He completed his internship and orthopedic surgery residency with Pinnacle Health System at Community General Osteopathic Hospital in Harrisburg, Pennsylvania in 2003 and 2007, respectively. He completed his orthopedic fellowship training at Bone & Joint Hospital/ McBride Orthopedic Hospital in Oklahoma City in 2015.
He is a member of the American Association of Hip & Knee Surgeons, the American Osteopathic Association of Orthopedic Surgeons, the American Osteopathic Association, and the Tulsa County Medical Society.
Dr. Crawley’s personal interests include ranching, collecting American muscle cars and attending OSU sporting events. He served in the Oklahoma Army National Guard from 1998 until 2004 and in the Pennsylvania Air National Guard from 2004 until 2006.
Dr. Crawley welcomes new patients and accepts most insurance plans. He has three office locations:
On the campus of Hillcrest Medical Center at:
Utica Park Clinic
1809 E. 13th St., suite 402
Tulsa, OK 74104
918-579-2300
On the campus of Hillcrest Hospital South at:
Utica Park Clinic
8803 S. 101st E. Ave., suite 100
Tulsa, OK 74133
918-574-0220
In McAlester at:
Utica Park Clinic
1308 E. Carl Albert Parkway, suite A
McAlester, OK 74501
918-558-6970
Making the Most of Your Hospital Stay
Durable Power of Attorney
Community Resources

Dr Crowley did a complete hip replacement on me over 3 yrs ago & I'm so very happy with it!! He & his staff are absolutely wonderful! He is such a caring & skilled surgeon!! I was walking without a cane in 3 weeks after the surgery!! He gave me my life back!! I highly recommend him!! Thank you again Dr. Crowley!!!!!!

Highly recommend. I will definitely use him again. The process was very efficient and I didn't have to wait very long to get the surgery.

Shout out to Dr Crawley, Clint Cator! When I had my first visit a year ago, it was nothing short of amazing. Both of these gentlemen truly care and listen to any questions or concerns I have. The journey from being in unbearable pain, to having both knees replaced, to being totally pain free has been a total life changer for me. I cannot thank them enough for this. New knees, new me!!!!

Surgery went as scheduled. Recovery is going as planned. Great surgeon and staff.

In for hip replacement. Anesthesia, surgery and nursing staff all very good. Thank you all