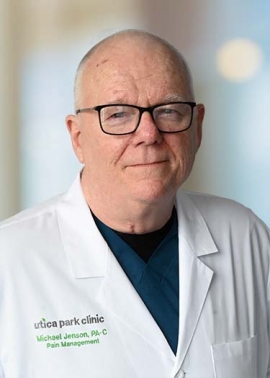 Mike Jenson, PA-C, specializes in pain management and has been practicing since 1983, mostly in the Tulsa area. He served 20 years in the U.S. military.

“I got into pain management when I saw how poorly soldiers, sailors and Marines were treated when wounded or injured and had long-term pain,” Mr. Jenson said.

“My philosophy is to provide you with the highest quality care with the goal of returning you to normal function, if possible,” he said.

Besides being a full-time physician assistant (PA), Mr. Jenson is also a lecturer, research sub-investigator and author of a combined 75+ publications and clinical research studies.

In 1969, Mr. Jenson joined the military as a U.S. Army medic non-commissioned officer (NCO) and U.S. Navy Corpsman. In 1983, he completed the Army physician assistant course at Ft. Sam Houston in Texas and a one-year flexible internship at Blanchfield Army Hospital in Ft. Campbell, Kentucky. Between 1983 and 1988, he was a battalion surgeon, completed numerous overseas deployments and served tactical risk and medical intelligence risk assessments.

• Master of Science degree in physical medicine and pain management from
University of Nebraska Medical Center, 2002

When not working at the clinic, Mr. Jenson’s interests include traveling with his wife, shooting and spending time with his three children.

Mr. Jenson welcomes new patients and accepts most insurance plans. His office is located near the Tulsa Spine and Specialty Hospital at: