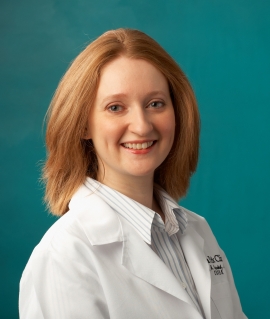 Nicole Chainakul, M.D., specializes in obstetrics and gynecology. She graduated from the University of Oklahoma Health Sciences Center in 2006 and completed her residency at the University of Missouri, Kansas City (UMKC) in June, 2010. Patient comments about her include:

"Dr. Chainakul is wonderful and understands what the patient is going through. She is one of my favorite doctors! I will be recommending her to all my friends who need a great OB/Gyn!"

"I love Dr. Chainakul! She’s so sweet and was very compassionate with me. She delivered both of my babies and I couldn’t have asked for a better doctor . She made sure I was taken care of and communicated very well. She’s the best doctor I’ve ever had by far!"

Dr. Chainakul’s most notable educational accomplishments include being named to the Alpha Omega Alpha Medical Honor Society, receiving a Tulsa County Medical Society Scholarship, and being named an Oklahoma State Board of Regents Scholar. Dr. Chainakul’s professional associations include memberships with the American College of Obstetrics and Gynecology and with the Kansas City Gynecology Society while completing her residency at UMKC. She has worked as a microbiology laboratory assistant at the University of Oklahoma and an anesthesia intern at University Hospital in Oklahoma City.

She enjoys spending time with her two pugs, traveling and visiting museums.

Protect Yourself from the Flu
Community Resources

So thankful for Dr. Chainakul. She is so very kind and caring and takes the time to listen to you. She is a huge blessing after years of struggling. I highly recommend her and her staff.

She is amazing! I would any of my loved ones in her care!

Dr. Chainakul was absolutely wonderful throughout my pregnancy and delivery with my son! She was always kind and respectful! If I have more children, I hope she is my Dr!

I love Dr Chainakul. I wish she was my Dr for everything!! Her staff is helpful and friendly and Brenda, her nurse, is great! I've never had one bad experience in this office. Dr Chainakul recently performed an abdominal hysterectomy and I have zero complaints about her bedside manner as I've read in other reviews. She is smart, friendly and cares about me as her patient, that's all I know!!

She is the best doctor I have ever had she has deliverd 2 of my boys she is amazing thoughtful really listens to me.

I love Dr. Chainakul she’s so sweet and was very nice to compassionate with me she delivered both of my babies and I couldn’t have asked for a better doctor she made sure I was taken care of and communicates very well. She’s very sweet and she cares best doctor I’ve ever had by far❤️