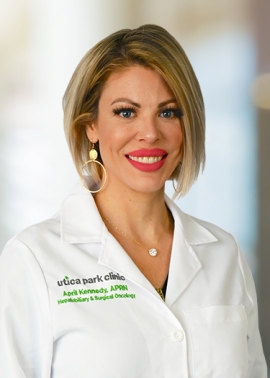 April Kennedy, APRN-CNP, has worked in health care since 2012 and specializes in hepatobiliary and surgical oncology. Ms. Kennedy has several family members in the medical field, which inspired her to pursue a career in health care. “The desire to help people and treat disease processes seems to run in my family,” she said. “During World War II, my grandmother was a NICU nurse and my grandfather was an army medic.  My brother is a chiropractor. I cannot remember a time when I was interested in any profession other than health care.”

Ms. Kennedy emphasizes that health is not one choice, but an entire lifestyle. “Getting and staying healthy is not just about taking your prescribed medications and seeing your doctor,” she said. “Health encompasses physical, mental and emotional wellbeing and is a constant work in progress for most people. Eating healthy, drinking plenty of water, exercising and finding ways to incorporate your mental and emotional health into daily activities is vital for overall health.”

When she is away from the office, Ms. Kennedy enjoys painting, reading, home improvement and remodeling, playing with her cats and dogs and working/playing on her hobby farm of goats and chickens.

Her office is located on the campus of Hillcrest Medical Center at: